Connect Classes to the World with Skype and Google Hangouts

Today's blog post is from Matt Miller, a high school Spanish teacher from Turkey Run High School in Marshall, IN. Find him at his blog at DitchThatTextbook.com or on Twitter at @jmattmiller. 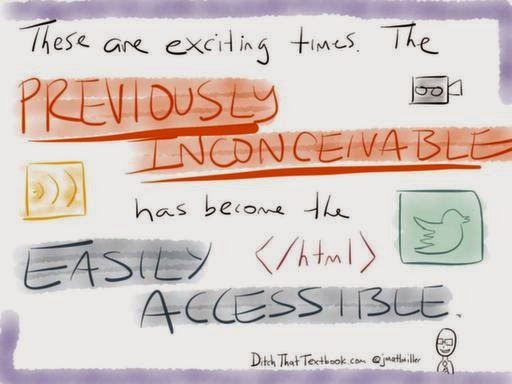 Last winter, there were several Mondays when my high school students would mob me in the hallway as I came in the school.

This was far from the norm for me. Usually, they give me a quick head nod or a smile in the hallway before school (if I was lucky!).

But on several Mondays last winter, they stopped me on the way to my classroom. They almost grabbed me by the arm in excitement.

What in the world would motivate high school kids to be excited about class on a Monday morning?

Global connections. They were meeting peers from halfway around the world.

For several weeks last winter, my Spanish III students at Turkey Run High School (Marshall, IN) got to interact virtually with English-learning students in Valencia, Spain. I met their teacher through the Skype Education forums (http://education.skype.com) and we worked together to come up with a plan to help our students interact. Some ideas were:


The experience was not without its hiccups! Our first Skype session didn't happen at all because my school's Internet firewall blocked certain parts of Skype. When our sessions started, the students were uncomfortable meeting new people and speaking in a foreign language, so the quality of their conversations wasn't as good as I had hoped. Some practice and familiarity helped that by the end.

When we concluded our final meeting with the students in Spain, my students had some extra confidence that they had communicated with real, live kids from another Spanish-speaking country.

The communication piece, however, was not the greatest take-away. In these Skype sessions, my students got to meet kids their age and saw first-hand how similar they were. Both were interested in fashion. Both liked to make each other laugh. Both asked similar questions and had similar interests. My students realized that these kids from Spain that spoke Spanish were just people, just like them. That realization is something they would have never come to from activities in a textbook.

Many of my students will live their entire lives in our small, rural, agriculture-based community and will not travel outside the United States, let alone outside the Midwest. Stereotypes about Spanish speakers in our community are generally negative and often aren't based on real relationships with real people they know. Maybe activities like this will help to break down stereotypes in our community.

Here's a video of my own students explaining what they liked about Skyping with Spain:


The sky is the limit for classroom activities with Skype and Google Hangouts (Google's version of Skype).

A Mystery Skype activity is a great first step into the world of global video chats. Here's some information:
Has your class read a book? If the author is still alive, there's always a chance that he/she will meet with your class via video chat. That also goes for experts in your content area, artists, scientists, astronauts, researchers, college professors, even athletes and celebrities. You never know until you ask!

There are lots of options for finding a partner class for activities on Skype:

How could you use Skype or Google Hangouts in your classroom? Why do you think it would be worthwhile to use? Or what concerns you about trying it? Leave a comment below!
Posted by Matt Miller @jmattmiller at 7:00 AM