For Whom Are We Really Introducing New Tools?

When I first thought about writing this, I was going to introduce a new tool that was pretty cool but not much different than those I have used before. As I was drafting a student came in just to lurk about my classroom and we began to speak. I asked what they thought of the new tool I introduced earlier in the week and they said it was fine but that they missed some of the old ones that I had used before. They asked me why I keep using “new stuff” all the time. I said, I get bored don’t you? The response was, not really. EPIPHANY! I was taken aback and began to reflect upon the student's statement. I thought about best practices. I reflected upon the reason for the introduction of so many new tools. I questioned for whom I was introducing new tools.

As teachers who may teach the same subjects every day, all day, it can become monotonous for US to use the same tool again and again, period after period, semester after semester. We have to realize that our students change from period to period, semester to semester and THEY have not had the “privilege” of repeated use of the tool. Often I think, as teachers, we find new tools and are energized and introduce them to the students before our students have mastered the previous ones because WE are bored of using the same tool. So, with that in mind I revisited my repertoire of tools and pulled out one that was a fan favorite and began to think of new ways to re-incorporate it into my classroom.

This tool is VOKI. Voki is an amazing tool that lets students create a customizable avatar of themselves that can speak. Voki is great tool for those who teach in a blended or online environment where it is necessary to assess or gauge the oratory abilities of the student. I first began to use Voki for students who had documented and/or well noted cases of social anxiety to give them a chance and a voice in the class. I was a great! They came alive virtually and were able to show me what they have hidden inside. It even surprised some of their peers and some, even began to come out of their shells. 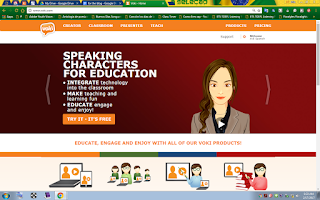 Voki is basically a talking head that also responds acknowledging and tracking the movement of the mouse. Students are able to use various computer generated voices with text to speech, in many languages and genders, or they may use a microphone to record their own voices or even call in and record their own voices. One of the things the students enjoy most is customizing their avatar, some even change it every class (which, incidentally, can give a glimpse into their current mindset). Voki is a great warm-up activity -- “change your avatar and greet the class” -- or just have them answer a simple question. They will change their Avatar and answer. This provides a quick check for understanding and a glimpse into them in a quick fun activity.

I revisited my once generic use of this tool and I have begun to use it in a variety of ways. I require each student to create their own avatar and monthly I assign a speaking assignment that they have to turn in via Voki classroom. I have noticed I receive longer responses with significantly better quality from their work.

With this social media connected generation of students, I am finding that meeting students in their world and gradually bringing them into this one has been quite effective. Now, when they are asked to speak in class they are less reluctant to do so.

I have begun posting an Avatar that poses a question to the class in our LMS (learning management system) and requiring each of them to respond and once they all have responded, I will embed four or five student responses and require that each student respond to one of their peers.

I have also used this outside of my language classrooms as well. I’ve used it to begin discussions in a class designed to teach seniors topics related to diversity and college culture. The Voki presents the controversial or ethical dilemma and then they are to discuss the matter either on an anonymous chat like Backchannelchat.com or live. The students say that they don’t feel as pressured to respond, because they don’t feel as if they will offend the speaker. They feel more at ease to speak their true minds.

Students enjoy the use of this tool and it is easy to use. It is also nice to use Voki to send them instructions for projects or even just a more personal kudo.

I have revived this tool for more prolific use in my classroom and I have also revived a well learned lesson; if it isn’t broken, don't fix it. However, that does not mean I can’t explore for improvements! Although our electronic repertoire of tools is ever increasing and there are some really cool  things that can excite us, we must not lose sight of for whom the tool should be exciting.
Posted by IDOE eLearning Team at 7:00 AM